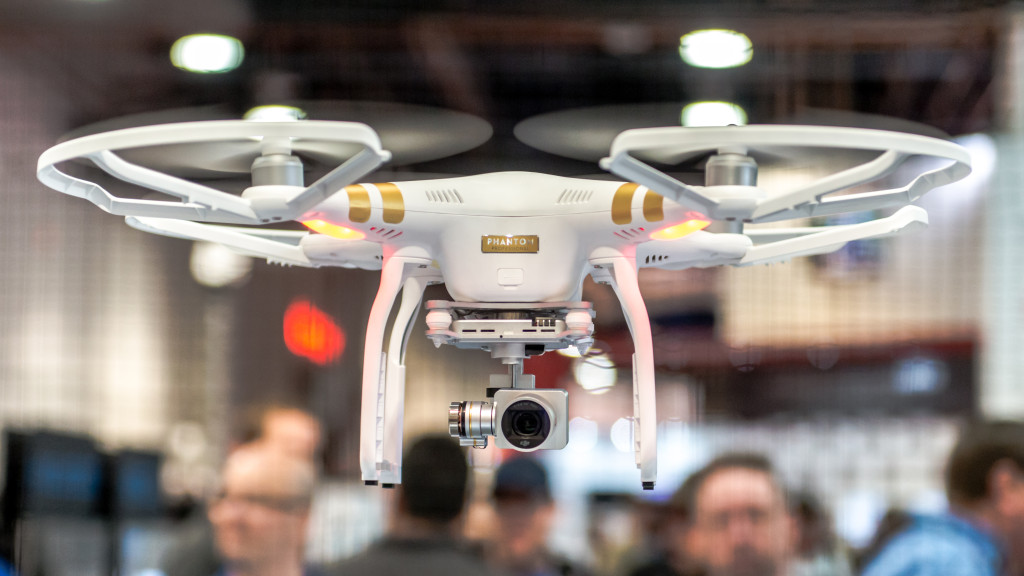 It has been a week since DJI Global announced the new Phantom 3 series. Pre orders are brisk, I am told by several distributors. This week the Phantom 3 flies at the NAB Show for everyone here to see and touch. There are two models whose only apparent visible difference is the color of the trim decals and logo.  Silver for the Phantom 3 Advanced, which is selling for $999 and Gold for the Phantom 3 Professional, which is selling at $1259. The only difference inside the drone, is the camera sensor. The Phantom 3 Advanced has a 1080 HD video camera and the Phantom 3 Professional has a 4K video camera. Both cameras take the same quality 12 megapixel still images with DNG raw support from Adobe. So the only technical difference is the video resolution.

So, having two models is an option for those who do not need 4K video capability. For example, if you are buying the drone for still imagery, the Advanced model will be cheaper and give the same quality as the Professional model will.  The strategy is a good one for environments like education, mapping, panoramic imagery and science.  The Phantom 3 model was made to bring the advanced camera and capabilities to the smaller and cheaper Phantom platform. It also uses the Inspire 1 Pilot Application and has a similarly advanced camera (it may even be the same camera sensor and lens combo as the Inspire 1).  Bringing the features of a $2800 drone to the $1300 platform price level is going to change the game for those who could not afford the Inspire 1.

Seeing how stable and powerful it seemed while it was flying in the cage, it is obvious that they have done a good job with stability and power. The battery is bigger in power and duration but the size of the battery cartridge is about the same as the Phantom 2 series giving an estimated 23 minutes flight time. The Phantom 3 has a 4 cell battery with a capacity of 4480 mAh and a voltage of 15.2 V. Picking up the Phantom 3, it feels like the Vision+ did in weight, and this bigger better camera is not much heavier than the Vision+ camera but has a bigger lens.

Listening to Eric Cheng, Director of Photography for DJI, answer questions about the Phantom 3 series after his talks, tells you a little about what is next for this new drone. He was asked about ground station being integrated, as this version of the app does not have that module in the GUI. In his reply he talked about ground station being available through the soon to be available SDK for 3rd party programming to be written with. The uses that some people want to do are very niche setups and make Q&A much more difficult to stay on top of. He insinuated that the DJI would be leaving that path of development up to 3rd parties, while they focus on providing superior abilities that are common to all uses. Currently the SDK has several companies working on products that will do things like mapping and surveying autonomously. These groups have specific knowledge of the business uses they are working with and can develop working solutions with the right features and options faster than DJI could learn what is needed.

When I went to the Consumer Electronics Show back in January, I said that Drone manufacturers were becoming camera manufacturers and that camera makers were becoming drone makers.  That statement has been verified by this new drone. DJI no longer even offers a GoPro compatible model of drone. They still make the Zenmuse gimbal and some older drone platforms that can use it, but there are seemingly no plans to ever make a Phantom that carries a GoPro again.  This would also give sound reasoning that the rumors about GoPro developing their own drone are true.  This might also give some business to 3D Robotics, who just announced their new drone that carries a GoPro on it.  Down the line, it means that DJI will have more control over their cameras and their bottom line. They can now also control the price of the whole package, when before they had to hope GoPro did not raise their prices. It also gives DJI the ability to give creators many of the things we need, like non fisheye lenses and DNG raw support for stills.

<<<On Left are Phantom 3 Professional models

On Right are Phantom 3 Advanced models >>>

The new controller has these new features

The Phantom 3 ships in a few weeks and after flying it we will have a full review…. for more information about the Phantom 3 series go to http://www.dji.com/product/phantom-3

Report and imagery by George Krieger copyright 2015 all rights reserved  George can be contacted on Social or at george@whirlingtripod.com